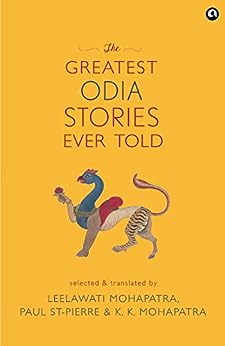 The Best Odia Tales Ever Instructed showcases Odia’s best storytellers starting from literary masters corresponding to Fakir Mohan Senapati, Gopinath Mohanty, Reba Ray, and Manoj Das to modern stalwarts like Pratibha Ray, and Nrusingha Tripathy, amongst others. A younger girl who was dragged away by a crocodile mysteriously resurfaces after a decade in Manoj Das’s ‘Mrs Crocodile’; a pet goat let unfastened in a authorities workplace causes amusement and chaos in Gopinath Mohanty’s ‘The Resolution’; Godavaris Mahapatra’s ‘Maguni’s Bullock Cart’ offers with the anxieties of a bullock cart driver caught between the trimmings of traditions and modernity—the tales on this anthology traverse an thrilling vary of themes from fantasy to actuality, and bone-chilling horror to rib-tickling humour.

Timeless, evocative and putting, The Best Odia Tales Ever Instructed gives a wealthy number of tales which can be unrivalled of their vary, model and complexity. Chosen and translated by Leelawati Mohapatra, Paul St-Pierre, and Okay. Okay. Mohapatra, the twenty-four tales on this quantity showcase the best brief fiction in Odia literature.